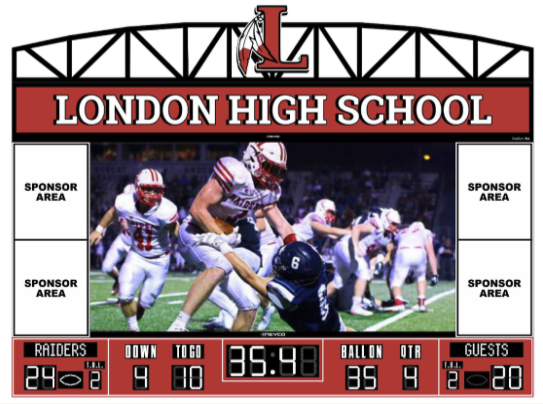 The London City School District Board of Education took the first steps to improve the game-day experience for student-athletes and fans for the district’s athletic teams during its meeting on Tuesday, May 11th. During the meeting, the Board approved a contract with JL Dimel LLC. in order to install large video scoreboards at Bowlus Field and Chadwell Gymnasium. In addition, the district will upgrade existing scoreboards at the varsity softball and baseball fields. The vast majority of the project is being funded through community donations similar to the field turf project in 2016, although the video boards will also include paid advertisements.

Beginning this Fall, the video boards will be used to show the player and team introductions and highlights. In addition, other school and district content will also be shared. The content and graphics for each event will be developed by the district's sports management and broadcast classes. The boards will be operated by students, who participate in the district’s internship program with oversight by a district-appointed advisor. Eventually, as the program grows, it is hoped that real-time highlights will be integrated into each contest.

The video board at Bowlus Field will be almost 17 feet tall and over 26 feet wide. It will replace the current scoreboard at the north end of the stadium and greatly enhance the stadium's sound. The scoreboard at the south end of the stadium will remain in its current state. The video board in Chadwell Gymnasium will be approximately 8 feet by 12 feet in dimension. The district is currently working with the City of London and the London Youth Football and Cheer to ensure use for the scoreboards being replaced.

Anyone interested in making a donation to this project or for interest in marketing opportunities, please contact, Athletic Director, Mr. Jim Wolverton, by email at jim.wolverton@london.k12.oh.us or by phone at 740.852.5705.